Hi Veg, and friends of NeverSeconds!

We are so happy to participate in your Around-the-World Lunch Tour. We are in kindergarten and our classroom is called JAM (how perfect is that, better yet on toast ). Which JAM is your favorite? (Strawberry!-Veg)

We thought would be nice to start by sharing a video that our school principal, Jackie, made: Greeting the World in Peace. In the video, Jackie takes a few moments to consider the common theme behind so many of the diverse greetings people use around the world:

Our school is located in New York City. It is an International School, and JAM has seventeen students from many different nationalities. Although we all speak in the same language (English) at school, we are from many parts of the world, and at home we may speak a completely different language. In our classroom we have two teachers: one is Brazilian/Italian and the other is American/Irish. I am Paula, one of the two teachers – the one from Brazil (I am also Italian). My American/Irish colleague is Keri.

At JAM we eat lunch in our classroom and we bring our lunches from home. When I came from Brazil to teach at JAM, my students’ lunches caught my attention right away – there was such variety among them! I have learned a lot over the last several years, from watching what my students bring to eat. I have seen Iranian, Bosnian, Indian, Japanese, and other cuisines. I have had a student whose lunch varied with the seasons, and others who prefer to eat the same thing every day. I have had a student who would build savory crepes during lunchtime: he would take all these plastic containers out of his lunchbox and explain what he was doing as he assembled his crepes – while Keri and I would look on, amazed!

Of course, our students also notice each other’s lunches, and there is a lot of learning at the lunch table, as we talk about what each of us has brought. We particularly notice the differences and smells!

I introduced the children, and the parents in this year’s JAM class to NeverSeconds and Mary’s Meals. Everybody was eager to be part of what you started Martha. The parents wrote descriptions of the lunches and the children exhibited their lunches for the photographs. So everything that is written in our blog posts this week is the result of teamwork! We are also delighted that on our last day on NeverSeconds will be the International Day of Peace and we will be celebrating it at our school. We will talk about it on Friday.

Today’s lunches are from Eduardo, Leah and Mica 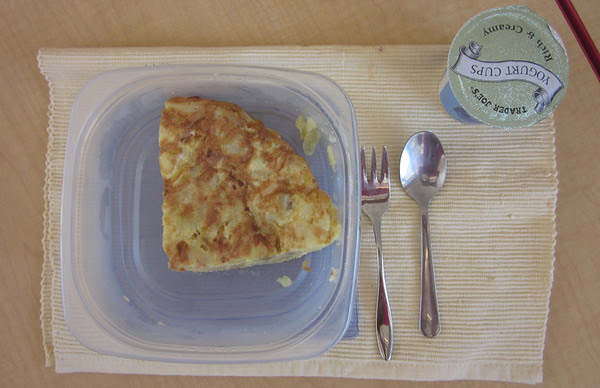 Eduardo’s lunch is Tortilla Espanola or Spanish Omelet is the most commonly served dish in Spain. It is made of eggs, potato and onion. Can you guess from where Eduardo is from? Eduardo also likes yogurt, and that’s what is in the pot at top right in the photo. 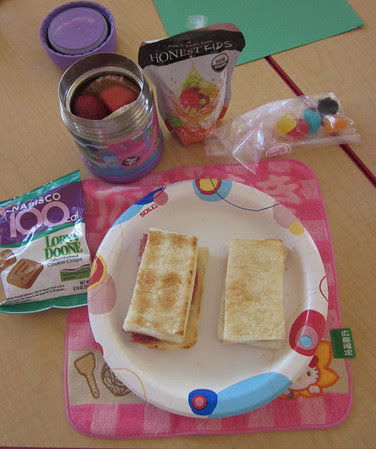 Leah’s lunch is a salami and cheese sandwich on toasted white bread. Leah comes from two cultures, half-Japanese and half-Canadian (Jewish origin). The lunch is obviously none of them, says her father: it’s an original creation from New York. Another of her favorite lunches is seaweed (Japanese) with cream cheese on it (Jewish)! She loves fruits (strawberries, today, in the small container), which make up roughly half of her lunch. She has some candy in a plastic bag, as a treat, she also has shortbread cookie chips in the bag on the left and juice to drink.

And we will finish Monday with: 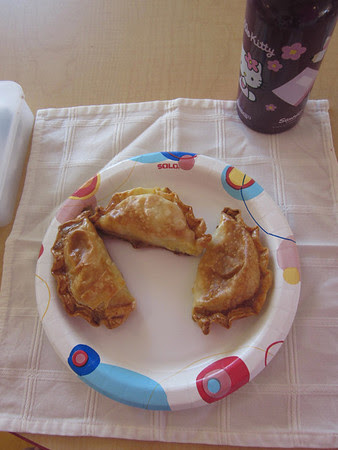 These are Argentinean Empanadas. Empanadas trace their origins to Galicia (Spain) and Portugal. It is now a traditional Argentinean dish.
Argentinean empanadas are often served at parties as a starter or main course, or in festivals. They come in many flavors and fillings. When several types are served, a “repulgue”, or pattern, is added to the pastry fold to differentiate them, so guests can tell them apart.

We changed the rating system a bit, because we’re in kindergarten:
Food-o-meter: 10/10
Bites: unknown
Eating with the mouth closed: we did great!
Speaking with the mouth full: work in progress – we must stop doing that
Food dropped or spilled on the floor: none (yay!)

Tomorrow we will see the lunches from four other classmates! See you tomorrow!