This Thursday in America we celebrated Thanksgiving. It's what you would call a bank holiday, a harvest holiday, where family and friends get together to give thanks (and eat!). My friends and family were devastated by Hurricane Sandy, some of my friends lost their homes, and my mother was without power for two weeks. I live in Jersey City (how many seconds? I'll give you a hint, we're a five minute train ride from one of the biggest cities in the US) (Took me 13!) and there was flooding up to about four blocks from me, but we only lost power for two days. I have been volunteering to help out with the people who lost everything. My friend Jeremy took the picture of the Hudson River the morning before Hurricane Sandy hit. During high tide, the Hudson River is usually about 8-10 feet below the waterfront walkway. You can see the Freedom Tower and lower Manhattan across the way. 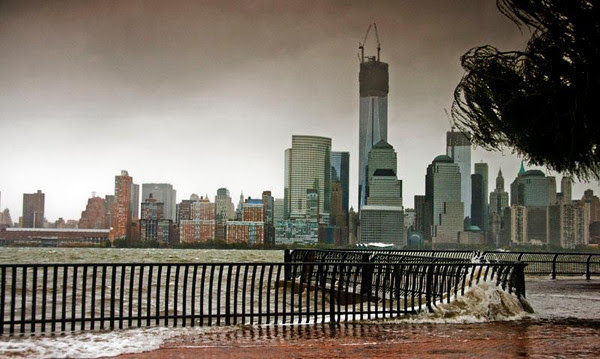 Although every family has their own Thanksgiving traditions, there are most traditional ones that most families adhere to, such as turkey, [american] football and the Macy's day parade. The parade is usually very touristy, with gigantic balloons that can take about 50-100 people to hold. Although it's a short train ride, we usually watch it on TV.

I've been hosting Thanksgiving for the past couple of years, so I do all the cooking. Although I'm a vegetarian myself, my family and friends are not, so I do cook a turkey. However, every other food I make is vegetarian.

Around Thanksgiving, if you spend a certain amount of money at the supermarket, you qualify for a free turkey. I qualified for two! I donated one turkey to a relief group who was cooking Thanksgiving dinners for families displaced by Hurricane Sandy and one to our local shelter. 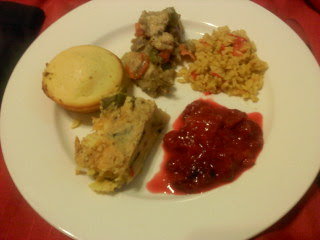 The plate pictured is my plate, which is why there is no turkey on it.

From clockwise:
Vegetarian stuffing: Stuffing is also a Thanksgiving staple. Some families stuff the turkey with it, but it wouldn't be vegetarian that way. Stuffing is usually vegetables, croutons and some broth, some people put chicken or turkey in it as well. Mine is made with portabella mushroom soup.

Squash casserole: Since squash is considered a harvest food, it's pretty traditional to have some sort of squash dish on the table. I used yellow squash and zucchini.

I also served candied yams and broccoli rabe. As I'm not the biggest fan of yams, so I didn't have them on my plate, and the broccoli rabe I forgot to put on my plate before the picture.

After a football break, we had dessert.
I served, apple pie, one of my favorite desserts! I tried to make a leaf pattern, but I'm not sure if anyone could tell. 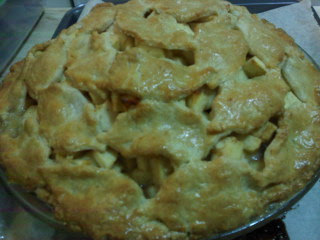 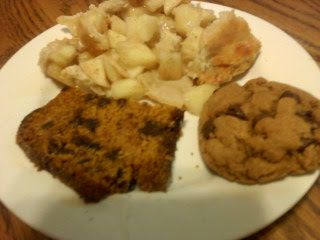 We rated food and dessert separately:
Dinner
Food-o-meter- 9.5/10 (My boyfriend doesn't like mushrooms, so he took off half a point)
Mouthfuls- We forgot to count!
Courses-Dinner (there were appetizer/snacks put out, but no one really ate them because dinner was ready)
Health Rating- 9/10 (the candied yams were made with sugar)
Price- Hard to figure per plate, but probably around $6 USD
Pieces of hair- 0 (thank goodness!)
Spills: 0 (first time!)

Not everyone had dessert or tried everything served, so that's why we rated it separate.
Dessert:
Food-o-meter- 10/10
Mouthfuls- A lot!
Health Rating- 5/10 (Apples and pumpkin brought it up!)
Price-Hard to figure per plate, but probably around $3 USD
Pieces of hair- 0

Happy Thanksgiving to you and your friends!

Thank you Tab. I think I understand Thanksgiving better now. You care and you share. I hope you had a lovely day.