The answer to my question- Jakarta is the closest Capital City. It is just a bit closer than Canberra. Though Adelaide in South Australia is the next nearest city and half right because it is the capital of SA. 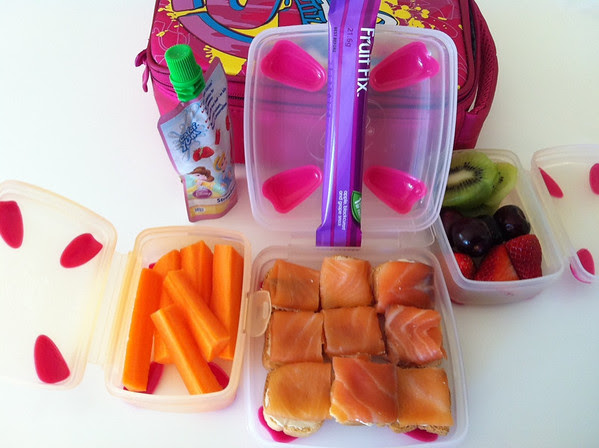 Lunch today was mini French toasts with cream cheese and smoked salmon. I had a some fruit and a yoghurt to go with it. I had carrot for my crunch and sip. My recess snack was a Fruit Fix. It says on the packet that it is healthy with a portion of fruit in it. We weighed out how much sugar there was. It was pretty shocking. There was 15g of sugar in it and it weighed 24g so it is pretty much all sugar. 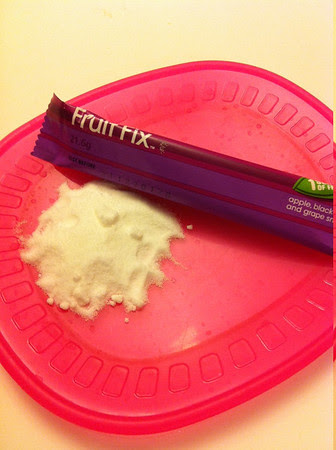 We didn't have any sugar cubes so I took a picture with a pile of sugar next to it. I had my swimming lesson after school and swam 30 lengths so hopefully that made up for it.

Food-o-meter- 9/10- the French toast had gone a bit soggy
Health rating- 7/10 because of my Fruit Fix
Mouthfuls- 48
Courses– main/dessert and my recess snack
Price- not sure but a bit more expensive because of the salmon
Pieces of hair– still none. Pheww
Amount of his packed lunch my brother brought home uneaten- He ate it all- a record!!
Number of Olympic medals won by Australia-. 7 though close to the UK who have 6.

I had my tea watching the Olympics tonight. It was really exciting. I watched the ladies pair rowing. The pair from the UK were great and Australia got the silver right at the end.

Good luck with your injections tomorrow Veg. I hope your arm isn’t too achy.
My little sister broke her arm on Sunday. She is three. Hopefully your injections won’t hurt as much as that!

Your total for Mary’s Meals is so close to £113,000. It’s amazing. My friends and I are planning to raise some money. We thought we would make and sell lemonade using the lemons from our gardens.

I am looking forward to seeing your Japanese breakfast.