I decided to try something different today. I usually would pick the burrito from today's menu but I chose the gammon steak instead. We don't have gammon at home because we don't cure our pork and I don't think I've tried it before. 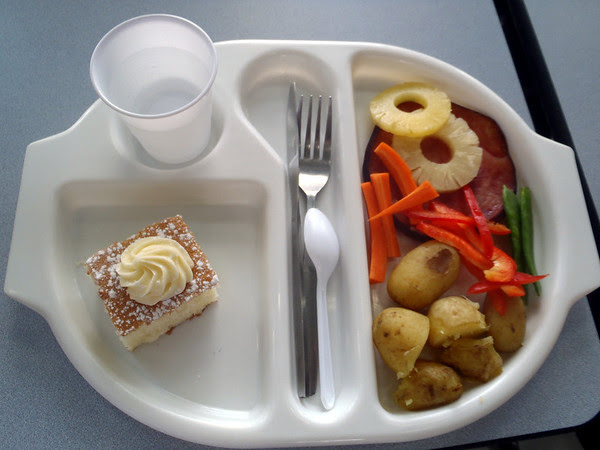 The pineapple was placed on top of the gammon so it was nice and warm. I didn't finish my gammon because I was unsure about the outside bits which were dark. You can tell now I have a dislike of black food! I asked for carrot sticks, peppers and an extra bit of pineapple to go with it. The new potatoes were very shiny and moved about easily. Some people have been asking why I have a plastic spoon for dessert. I don't know but I will ask because we just throw it away everyday. We don't recycle them. The icing on the cake was lovely. I didn't go back for fruit because I didn't finish my gammon.

Many people in Finland (10 seconds!) have been in touch and sent me photos of their lunches and they all look so tasty. I was amazed to find out that all children in Finland get a free school lunch everyday! 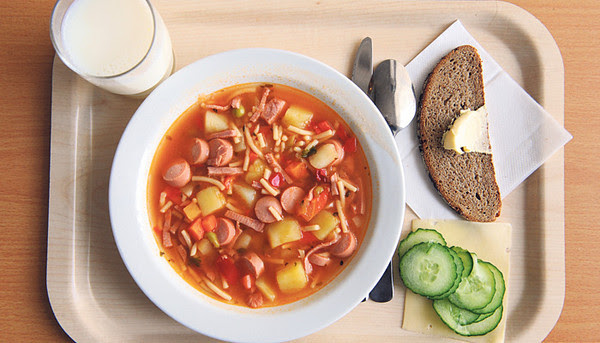 This is from a 16yr old girl who emailed in English (I think that's amazing) and said 'We can take as much food as we like, there is no one putting it to our plates, or saying how much we can take. It is sausage and veggie soup with rye bread, cheese, cucumber and milk.' I love soups and I would really like a big meaty soup for lunch. It would be two course in one! Thank you Supremacu for sending it in.

Tomorrow is special because we are having a Diamond Jubilee lunch to celebrate 60 years of the Queen reigning. It used to be 75 years but it was changed to 60 for Queen Victoria (my fact of the day!)